Delivering his standout result of the season so far, Rockstar Energy Husqvarna Factory Racing’s Thomas Kjer Olsen has placed an excellent third overall in the MXGP class at the FIM Motocross of Nations. Boosted by a stunning race one victory, Kjer Olsen battled back from a couple of crashes in moto two to secure his place on the overall MXGP podium. For Arminas Jasikonis, two consistent finishes netted the Lithuanian an impressive fifth overall in the Open class.

The 74th edition of the FIM Motocross of Nations took place at the Mantova race track in Italy with heavy rain creating incredibly tough racing conditions. The circuit’s sandy top layer covers a hard and slick base, which with the rain created a treacherous racing surface for all competitors during the three mixed-capacity races. 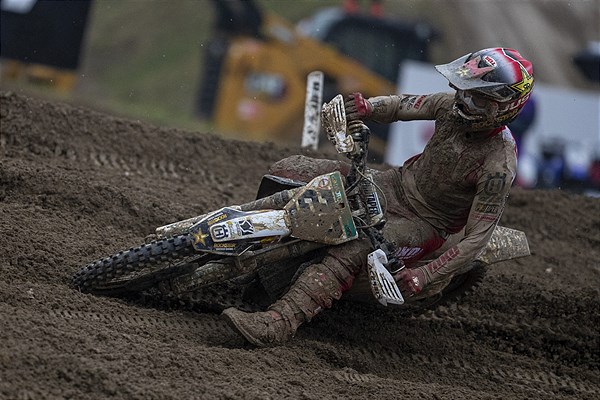 With two MX2 GP wins at the venue 12 months ago, Thomas Kjer Olsen clearly knows the fast way around the circuit and delivered one of the standout rides at the event. Lining up for Team Denmark, Kjer Olsen started the combined MXGP and MX2 class moto in fifth before moving into the lead on lap five. From there, he fended off multiple challenges from Tom Vialle to secure a highly impressive race one victory.

Frustratingly, the 24-year-old’s hopes of a repeat success in his second moto unravelled on lap one when a crash left him with a lot of work to do. Remounting near last and making vital passes throughout the duration of the 30-minute-plus-two-lap race, Thomas made the crucial move into 13th during the closing stages of the moto to secure his place on the overall MXGP podium. 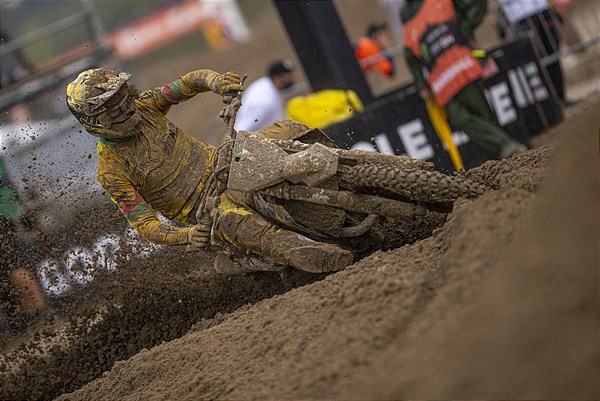 Representing Team Lithuania, Arminas Jasikonis competed in the Open class and despite battling arm-pump in both of his races, he brought his FC 450 home in a strong ninth place in his opening moto.

In moto two, and with the circuit conditions at their worst, Jasikonis placed 14th to secure fifth overall in the Open class. In doing so, the recently turned 24-year-old made a substantial contribution to his nation’s best ever finish at the FIM Motocross of Nations, with the small country of Lithuania ultimately placing 13th overall.

Throughout the overall results there were many impressive performances from riders on Husqvarna Motorcycles’ FC machinery, with notable finishes coming from Evgeny Bobryshev and Karlis Sabulis.

Rockstar Energy Husqvarna Factory Racing’s Thomas Kjer Olsen and Arminas Jasikonis will next be in action at round 11 of the FIM Motocross World Championship, the MXGP of Germany, on October 3.

Thomas Kjer Olsen: “It was an amazing feeling to win the first moto today. I had a great start then I found some good lines and I began to work my way forwards. A few times Tom Vialle would get close but I just felt really strong on the bike today and held him off for the win. I was really confident for another strong result in my second race, but a couple of crashes put me down the field and in these conditions at the back of the pack, it makes it really difficult. I came through quite well though to finish third overall in my class and this weekend has given me a lot of confidence for the remaining rounds of the world championship.”

Arminas Jasikonis: “It wasn’t an easy day today that’s for sure. I struggled a little bit with arm pump and that effected my results. It wasn’t easy battling for positions in the mid pack with so many riders and the rain, it was just a difficult day. One positive is that it was Team Lithuania’s best overall finish at the Motocross of Nations so that’s good. But for myself, I’m a little disappointed.”

Download high-res images from the FIM Motocross of Nations here.

This website uses cookies to improve your experience while you navigate through the website. Out of these, the cookies that are categorized as necessary are stored on your browser as they are essential for the working of basic functionalities of the website. We also use third-party cookies that help us analyze and understand how you use this website. These cookies will be stored in your browser only with your consent. You also have the option to opt-out of these cookies. But opting out of some of these cookies may affect your browsing experience.
Necessary Always Enabled
Necessary cookies are absolutely essential for the website to function properly. This category only includes cookies that ensures basic functionalities and security features of the website. These cookies do not store any personal information.
Non-necessary
Any cookies that may not be particularly necessary for the website to function and is used specifically to collect user personal data via analytics, ads, other embedded contents are termed as non-necessary cookies. It is mandatory to procure user consent prior to running these cookies on your website.
SAVE & ACCEPT